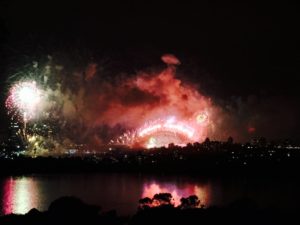 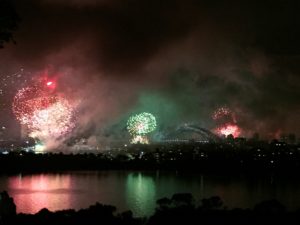 It is a wonderful time of year when one feels they are offered a fresh start. To begin again. To begin a better life in the following year. To be a better friend, partner, mother. Be healthier. So many ambitions and so many ways to be a better, happier, more impressive version of oneself. So with all these great plans for the New Year. One needs a place to celebrate. This is always a tricky decision of what to do and how to do it. With both a five year old and six year old in tow, what does one do? Where does one go? We decided this year to see in the new year with the animals (mostly in exhibits) at Taronga Zoo. I had never been to an evening event at the zoo before. My previous experience at the zoological park that had its 100th birthday in 2016, has been with my own children. Usually in the scorching heat in the over crowded school holiday period. (This is the worst possible time to go but as a teacher I don’t have much option). One trudges down the steep hill inviting the children to suggest the animals they would like to see. At the completion of the excursion, which never comes to a close without an ice cream, all involved are physically exhausted. The exhaustion is not only from the heat and the constant walking to and through each exhibit, but also from the superimposed elation and constant excitement put on ones face as one approaches each new exhibit as if it is the first time you have ever seen a giraffe.

It is so exciting for my kids and we must acknowledge that this was the very reason for the visit in the first place.

This brings me to New Year’s Eve. We were excited that we chose to have a different experience to see in the start of 2017. As zoo friends we were given the opportunity to purchase tickets to sit in the bird show amphitheatre which has an unparalleled view of the Opera House, Harbour Bridge as well as the five locations, actually barges from where the fireworks are projected. We (my husband and I as well as our 2 little girls and my parents) had sensational seats at the top of the amphitheatre with enough food and drink to be camped there for a week (in true style of my family). The nine o’clock fireworks were suddenly upon us after much excitement of visiting the animal exhibits, viewing the harbour below as well as musical entertainment. The countdown happened and my five year old daughter yelled out, ‘Mum, the rocket stars!’. That comment in itself was totally magic. What a beautiful description of fireworks. The rocket stars were magnificent at both the nine o’clock and midnight time slots. The sound of the ‘rockets’ leaving the platform were interjected with a roar from a disturbed lion. Surprisingly, the giant turtles from the Galapagos Islands didn’t move and inch.

The fireworks saw sparkling colours dash across the sky. The fleeting moments of magical beauty which are never so well captured by a digital device. The excitement, the ‘oooos’ and ‘ahhhhs’. The amazement and elation felt as you watch the coloured explosions and hear the pounding of the sky as each new rocket is launched.  It is a truly world class spectacular.

At the cessation of the display, the coloured smoke finally disperses and the sky returns to its original, seemingly unadulterated state. However, the audience leaves with a renewed sense of fun, joy and fulfilment ready to step into a wonderfully inspired New Year.