It’s this time of year when celebrations are endless. My nephew has just graduated from Primary School. A big achievement although has has in every way out grown the school for little people.

To assist in the Year 6 farewell function, my sister dutifully volunteered to help. As an interior designer she holus bolusly s 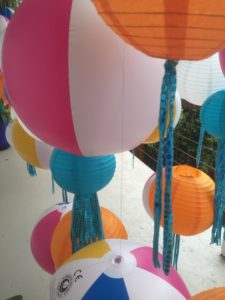 igned up for the decoration committee. After several organisational meetings, it was deemed she would be in charge of ‘ceiling’. My sister and another friend with child also graduating, set out to design something eye catching and extravagent for the monumental ceiling of the entire assembly hall. The theme was set as ‘Beach’.

So the decision was made that copious amounts of beach balls in a variety of colour and sizes as well as paper lamp shades in white, orange and aqua would be strung by fishing line off an 8 metre rope which would span across and hang above the length of the tables where the students would be seated. However, there was not just one span of 8 metres, it was in fact 3 lengths of 8 metres.

Now my sister is the typical first born, straight A, high achiever, perfectionist, by the book, reads each line of the recipe/instructions type of girl. I assisted in this massive task, by tying fishing line to the tops of beach balls and using the air compressor to blow up the balls. Fortunately I didn’t have to use my lungs because after 70 of them I don’t think I’d have any lungs left. 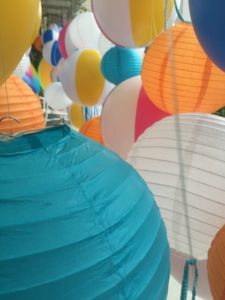 Sis had a great idea that she would simply hang the ropes across her front balcony and we would hang the balls and lamp shades from there. This way we could see how they would look hanging – a great idea. In my usual form, I was ready to ‘just go for it’, get different colours and different lengths and ‘wing it’. Alas, I should have known, there was a colour coded, symmetrically balanced drawn plan in which to follow. At this point, I thought, ‘Is this even going to be possible?’ But sure enough, ‘straighty 180’ started at a central point and worked the design harmoniously out from the middle.

So we fort the ongoing cyclone and held off the rain and the first 8 metres was complete. I thought wow, that looks spectacular, I guess the other lengths will have their own individual designs too, so onto the next one. I was ready for the next design to appear, but alas the next two had to perfectly match the first 8 metre length. (of course they did….what was I thinking?). I helped with one and the ceiling decorating team of two continued to complete the rest.

Then came hanging day. I found myself on the ‘ball walking committee’. As my sister only lives down the street from the school, the 5 of us (by this time, my brother in law and my father were literally roped in too) had the good fortune or otherwise of walking these balls down the street, across the zebra crossing, d

own the school driveway, down the stairs to the hall. Who needs to see to a circus when you could watch us for free.

We did this victory walk three times. Before we started the walk I already knew that I had minimal upper body and arm strength when trying to do things above my head, this walk just confirmed this knowledge. We arrived at the hall. The first 8 metre length was looking spectacular as my sister clambered up a mile high ladder to the ceiling beyond. As number two and three lengths went up, guess what, my job (when not handing drills and screwdrivers up the ladder) was to stand on the assembly hall stage and ensure the balls were hung at exactly the same hight, level and all balls equidistant…no pressure.

From my end with a fair bit of guess work, a lot of luck and much careful direction from eagle eye (my father who found himself on the ‘ladder and knot tying committee’). The ceiling truly looked spectacular. The balls seemed to levitate, albeit ready to bounce on the head of an unsuspecting Year 6 student. 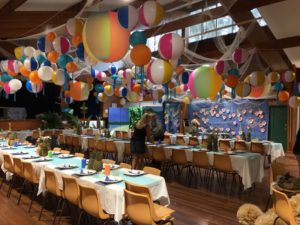 The world of design is worth getting involved in. You just don’t know what team, committee or physical journey it will get you into next. I certainly learnt that there is no i in team and the visions of others can be inspiring if not a little humorous.